How do your expectations influence the performance of your students?

The answer may surprise you, and, like many influential scientific studies, it starts with some dumb rats and some smart rats.

Bob Rosenthal, PhD, is an experimental psychologist has spent the last four decades researching how student performance might be influenced by our expectations.

In one experiment, he labeled rat cages to indicate that the rats inside were either very smart or very unintelligent; the secret was that all of the rats were just normal everyday lab rats. He then presented the rats to a group of experimenters and told them that they would be working with a specific rat, which they believed to be either very smart or very unintelligent. The researchers’ task was to run their rats through a maze over the course of a couple of weeks and record their progress. 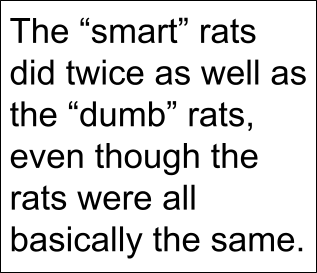 Do you think that the researchers’ preconceived notions about the rats’ abilities affected their rat’s performance?

It actually had a very significant impact! The “smart” rats did twice as well as the “dumb” rats, even though the rats were all basically the same at the beginning of the study.

Why Am I Thinking of This?

At the risk of burying the lede, I was hit hard by Figure 8 in The Opportunity Myth. While 82% of the surveyed teachers supported the high rigor of their state’s content standards, only 44% of the teachers expected their students could be successful with those standards. 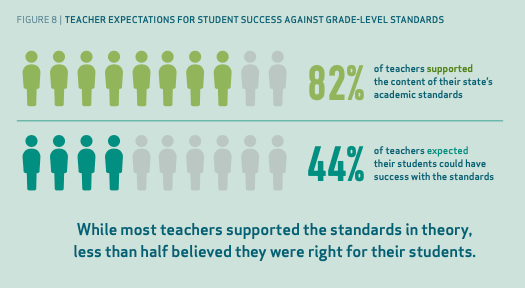 As we work tirelessly to return students to their pre-pandemic performance levels, it is essential that we have HIGH EXPECTATIONS for our students – an unwavering belief that our students can (and will) succeed. Authentically high expectations for students lead teachers to make choices about content and instruction that result in stronger assignments, instruction, deeper student engagement, and ultimately student growth, compared to classrooms where teachers reported the lowest expectations for their students.