About 32 years ago I had just completed my B.S. in Mathematics and was immediately hired to teach mathematics at Roosevelt Junior High School in Oakland, California. I thought I knew everything there was to know about K-12 math concepts. Most certainly, adding and subtracting whole numbers!

However, I was almost immediately humbled by a student’s innocent question in the newcomers class I was teaching. This was a class made up of students who were new to the United States, and therefore the typical student in this class had little or no prior educational experience in the country they came from.

“Why do you have to cross off that top number and put a little one over there?”, she said, pointing to the subtraction problem I had just expertly solved on the chalkboard.

I gave some sort of lame answer about the top number not having enough, so he goes next door to borrow a one…blah…blah…blah. It was at that moment that I knew it was not enough to know the algorithms, but I had know WHY they worked and how to explain them to students.

I have come to love the CHIP MODEL for visually representing the four operations of whole numbers because it makes sense and it directly parallels the standard algorithm.

Before we model the operations, let’s first begin by using the chip model to visually represent numbers.

The chips are a visual representation of the place value system in mathematics.

Because we use the base-ten system, we can exchange 10 dots in one column for 1 dot in the column to the left. If this seems confusing, let’s use base-ten blocks to take a look at the same “exchange” idea.

Using base-ten blocks are using for introducing this exchange rate because the relative size of the blocks are proportional to one another. Studnets can literally count that ten unit cubes equals 1 ten-rod and 10 ten-rods is the same size as a single hundred-square.

There is no need to move on to the chip model until students truly understand the concept of exchange rate.

The exchange rate becomes relevant when we want to express a number in its simplest form.

After modeling the values, we see that there is one opportunity to do an exchange in the one’s column. Since there are 14 ones, we can exchange ten of the ones for a single dot in the ten’s column.

Here is another example, this time required two exchanges.

Addition with the chip model 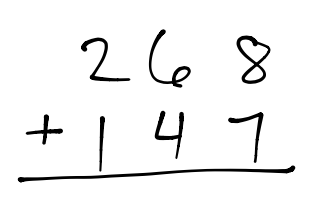 Notice that all the work students would be doing is with the dots. We haven’t actually recorded any of the steps in the standard algorithm. This is by design! We need to give students plenty of experience with the visual model to make sense of the math concept BEFORE moving to the more abstract algorithm.

Eventually, students will show the chip model and the algorithm side-by-side, using the chip model one the left and recording each step with numbers on the right side.

In a nutshell, there are only two components of addition that we need students to understand:

Now we just need to provide our students with numerous opportunities to practice. During their practice, students will naturally seek strategies for becoming more efficient.

Subtraction with the chip model

As mentioned earlier, we want to explain subtraction with regrouping in a way that is mathematically sound rather than resorting to mnemonics and metaphors. We can achieve this by using our understanding of addition to make sense of subtraction. 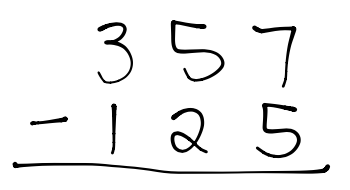 That previous example did not require regrouping, so here is one that does require it.

Using the chip model, we condense all the addition and subtraction lessons from 1st grade through 4th grade into three simple truths:

Special cases like adding and subtracting across columns of zeros are merely natural consequence of the three truths and no longer cause students to think they have to learn how to handle a bunch of “what if” scenarios.

Multiplication in the next post! You can view it here.