Set (stylized as SET) is a real-time card game designed by Marsha Falco in 1974 and published by Set Enterprises in 1991. The deck consists of 81 unique cards that vary in four features across three possibilities for each kind of feature: number of shapes (one, two, or three), shape (diamond, squiggle, oval), shading (solid, striped, or open), and color (red, green, or purple). Each possible combination of features (e.g. a card with [three] [striped] [green] [diamonds]) appears as a card precisely once in the deck.

In the game, certain combinations of three cards are said to make up a set. For each one of the four categories of features — color, number, shape, and shading — the three cards must display that feature as a) either all the same, or b) all different. Put another way: For each feature the three cards must avoid having two cards showing one version of the feature and the remaining card showing a different version. 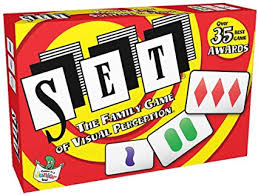 Several games can be played with these cards, all involving the concept of a set. A set consists of three cards satisfying all of these conditions: