View our #TapeDiagramTuesday past problems here.

How often have you heard that in your classroom. Heck…I certainly heard it uttered numerous times in my own classroom. In fact, there are many times in which I was the one doing the complaining.

Oh, how I wish I was taught how to use tape diagrams to solve word problems. Unfortunately, it was not until deep into my career as a math teacher that I learned about this awesome tool for solving word problems. Long ago I was introduced to the 8-step modeling method. I don’t know for sure, but I think the eight steps were originally from this book by Bob Hogan and Char Forsten. As the name suggests, it is eight wonderful steps that guide the student to drawing a pictorial model of the word problem. As students read and re-read the problem, it becomes more of a story and less of a problem.

2.  Turn the question into a sentence with a space for the answer.

3.  Determine who and what is involved in the problem.

5.  Re-read each sentence one at a time and revise the bar(s).

6.  Put the question mark in place.

7. Work computations to the side.

8.   Write down your answer to the problem.

Let’s dig into each of these eight steps using the following 2nd grade addition problem:

Brienne has 23 fewer pennies than Alonzo. Alonzo has 45 pennies. How many pennies do Alonzo and Brienne have altogether?

Students will find themselves reading the story numerous times. Each time will have a different purpose in the model drawing process.

Step 2: Turn the question into a sentence with a space for the answer.

Step 3: Determine who and what is involved in the problem.

Step 5: Re-read each sentence one at a time and revise the bar(s). 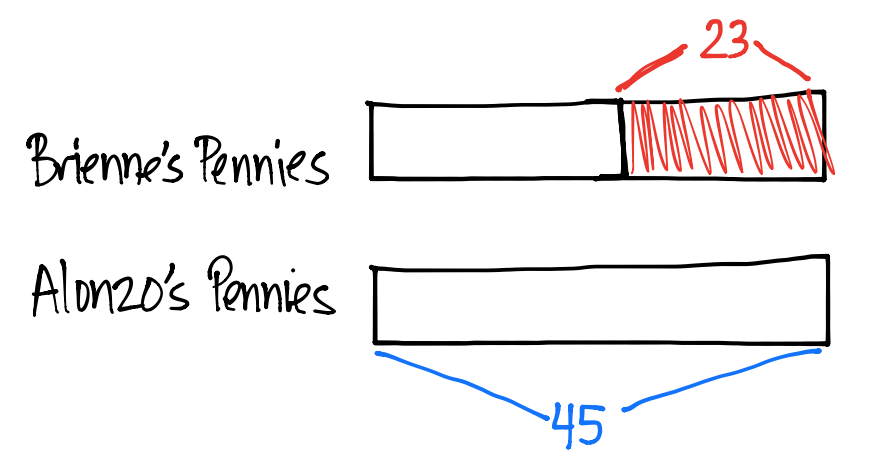 NOTE: There are often more than one way to revise the bars to match the story. For example, rather than shortening Brienne’s bar, we could have lengthened Alonzo’s.

Step 6: Put the question mark in drawing. Optional: Use letters to represent the unknown(s).

Step 7: Work computations to the side.

Step 8: Write down your answer to the problem.

As students continue using the eight steps to represent word problems, students will also begin to notice that word problems using addition and subtraction begin to have a common look about them.

Here is a wonderful online tool for practicing drawing models for addition and subtraction problems. To help students remember the eight steps, consider prominently displaying this poster showing each of the steps. Students might also benefit from using a graphic organizer that shows each of the steps and provides workspace too. Let’s take a look at a multiplication problem. In this case all eight steps are completed at once. Take a moment to practice multiplication and division problems here. Once the problem has been modeled, we see that two units represents 28 students. The model with some worked filled in might look like this… So, now you have seen an example from each of the variety of problems for which tape diagrams are particularly useful. Now it is time to practice!

Here are example problems taken from Eureka Math. Give them a try!

Mrs. Onusko made 60 cookies for a bake sale. She sold ⅔ of them and gave ¾ of the remaining cookies to the students working at the sale. How many cookies did she have left? (G5 M4 L16)

Jillian exercises 5 times a week. She runs 3 miles each morning and bikes in the evening. If she exercises a total of 30 miles for the week, how many miles does she bike each evening? (G7 M2 L17)

Monica and Naomi had the same amount of money. After Monica spent $25 and Naomi spent $36, Monica had 2 times as much money as Naomi. How much money did each have at first? (G8…not from Eureka Math)

In a school choir, one-half of the members were girls. At the end of the year, 3 boys left the choir, and the ratio of boys to girls became 3:4. How many boys remained in the choir? (Algebra, Module 1, Lesson 25)