Pyramid is a solitaire game where the object is to get all the cards from the pyramid to the foundation. 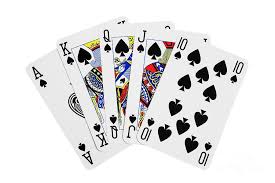 The object of the game is to remove pairs of cards that add up to the total of the highest card in the deck from a pyramid arrangement of 28 cards.

To set up the pyramid, one card is dealt face up at the top of the playing area, then two cards beneath and partially covering it, then three beneath them, and so on completing with a row of seven cards for a total of 28 cards dealt (or six rows of 21 cards). The remaining cards are placed to the side face down. This is the Stock (draw pile).

You may draw three cards at a time and play with only the card on the top.  When three cards are drawn at a time, you can continue to cycle through the deck. Alternatively, you may draw cards from the Stock one at a time and match it with any exposed card. If no match is made the drawn Stock card is still discarded into the Foundation.

Once the Stock is exhausted and/or no more pairs can be made, the game ends.

To score, count the number of remaining face up cards in the pyramid. A perfect score is therefore zero, where all cards have been matched into the Foundation.